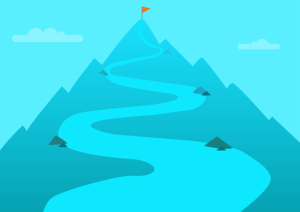 An easy way to understand what is energy alignment is to think about driving from New York to Los Angeles.  Imagine we get in our car and drive north for a day. We end up farther away from where we said that we wanted to go.

But what most people do is to then complain about how they just can’t ever reach Los Angeles.  Every time they try to go to Los Angeles, they end up somewhere else. These are the people that did not align their Self with their desire before starting to take action.

So one important part of being able to have what you want is to first have your energy alignment with your desire.

An Example of Energy Not In Alignment

But subconsciously they may still feel committed to their former spouse.  Or perhaps they are scared of being hurt again by another person. Unconsciously, their Energy is Blocking the possibility of being in a new relationship.

It’s important to note here that when a person is energetically blocked from having their desires, there is ALWAYS some supporting reason for that block.  Energy blocks never start out with intent to hurt the person. Rather, the block usually begins with some positive intent.

The example above comes from an actual client that I worked with.  Charles still felt committed to his former spouse, Sally (names changed for this writing).  This commitment was held in place even though they had divorced several years prior. Charles had not even been on a date since his divorce.

Further, Charles felt terrified of the thought of dating.  He felt that he had suffered a tragic loss during his divorce.  He felt as he had no one in his life, and no potential of having anyone.

How to Be In Energy Alignment

Charles wanted to be free to date again and to have someone to share his life with again.  But these were only his conscious thoughts. His Energy is what drove his outer life experiences.

When speaking to Charles I immediately realized that he used the term, “my wife” when describing or speaking about Sally.  I brought this to his attention and asked him to speak this statement out loud, “I am no longer married to Sally.”

To his surprise Charles found that this simple statement was almost impossible for him to speak out loud.  Gently I coaxed him to make the statement that he knew was true, but this “knowing” was only intellectual.  He had completely denied this knowing emotionally.

It is this Emotional Acceptance that we all yearn for but find so challenging.  Over and over we repeated this phrase together until the pain began to dissipate, and the healing had begun.

When we are in emotional turmoil it feels like knots in our stomach area.  The process of uncovering the old hidden hurts and traumas can be painful but once we start to simply accept the pain we find the knots begin to unravel.  Inner peace is the natural outcome from allowing you to free yourself from these past hurts.

On our third session together Charles told me that he wanted to discuss a problem that he was having with his girlfriend.  I was in a panic! Had I confused my sessions for this appointment? I thought my appointment was to be working with Charles, the man that had not been on a date in Several Years!

I sheepishly apologized to the man on the phone and confessed that I must have made a mistake and pulled the wrong file.  “Am I speak to Charles Smith?  He confirmed that he was indeed Charles.

I asked about the situation with being unable to date for several years.  He casually replied that after his first session it just didn’t seem to a big deal anymore and he had recently started dating someone.

To me, this speaks to the truth of how miracles occur from healing.  It is natural to have a desire and to have that desire fulfilled in your life.  But if we have opposing desires, we remain out of alignment with our hopes and dreams.

Are you ready to unravel your knots and become in energy alignment with your dreams and goals?

The Soul Healing Therapy process makes sure that you are in energy alignment with your desires so that you are free to take action and truly move towards having your dreams and goals fulfilled.